This is my blog, intended to provide information relevant to the history of Edinburgh in the Georgian period. I would love to hear any comments you may have.

Two early views of Princes Street in the second decade of the nineteenth century by John Heaviside Clark offer an excellent visual insight into the life of Georgian Edinburgh. Both views represent divergent prospects from the same spot, at the junction with South St Andrews Street. These works are aquatints, a sophisticated type of print that results from a process using acid-resistant rosin to produce distinctive tonal effects. They were first published in 1814 by printseller Daniel McIntosh, whose premises were located at 16 St Andrews Street. In 1817 McIntosh described his business on his trade card as 'D. McIntosh. English and Foreign Printseller, Carver and Gilder, Ladies fancy Works, Stationery, Water Colours & all Requisites for Drawing'. The first of these aquatints is shown above, and looks south-eastwards towards distant Arthur's Seat with the cliffs of Salisbury Crags just below it. On the right can be seen the tall tenements of the Old Town, some at least ten storeys high, with the spire of St Giles Cathedral on the extreme right. On the extreme left the distant Nelson's Monument on Calton Hill can be seen; this was built between 1807 and 1815 to honour the late naval hero, and indeed it has an unfinished look. Below Arthur's Seat in the middle distance the artist shows the North Bridge, and below this what looks like white smoke or steam; this is the site of present-day Waverley Station, but in 1814 railways were undreamed of and there was certainly no station there! Contemporary maps show that at this time there was a slaughterhouse on the spot. On the right in the middle distance is the old Crofts Road connecting with Princes Street. This was later renamed Waverley Bridge after Sir Walter Scott's famous series of novels. Princes Street itself is shown with its south side completely free of the development that would later hide some of this superb view. In the foreground the artist has depicted the fashionable ladies and gentlemen of the New Town taking the air whilst two-in-hand carriages and a heavily laden mail coach rattle over the cobbles. 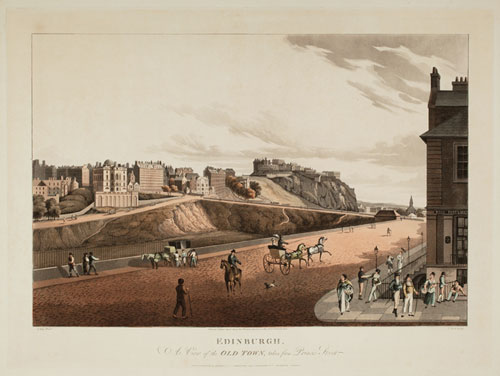 The second aquatint looks south-westward towards Edinburgh Castle. Those who are familiar with this view today will note the absence of the Scott Memorial and National Galleries at the foot of the Mound. Whilst the New Town was being built in the late eighteenth century (see blog post of 12 December 2011, below) the 'Earthen Mound' was created by dumping about 1.5 million cartloads of earth excavated from the foundations of the new buildings in order to create an artificial ramp connecting the Old and New Towns. In the foreground the fashions of the day are shown, and it can be seen from these prints that pantaloons (trousers) are becoming popular with the gentlemen, though some are persisting with breeches and half-boots. A female carrying baskets is probably a street vendor. On Princes Street itself oil lamps can be seen, and fine quality pavement; the stone for this was mined in Caithness in the far north of mainland Scotland. Originally all buildings in Princes Street had the same format: set back from the street with stairs down to a basement and stairs up to the ground floor. Heights were generally three storeys plus an attic. Of this original format only one such property remains in its original form. Through the 19th century most buildings were redeveloped at a larger scale and the street evolved from residential to mainly retail uses.
Posted by Colin at 07:38